Founder of Sit Down Gallery in Paris 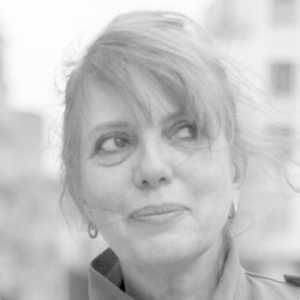 After a double degree in law and art history, Françoise Bornstein became interested in photography.
In the mid-1980s, she began working for a photographic agent specialising in fashion, and then worked for several years at Marie Claire magazine, where she was in charge of the visual side of the fashion editorial team.
In 1993, she opened her own agency of photographers and illustrators. She then worked in advertising as an art buyer.
Ten years later, she created SIT DOWN and expanded her activities to include art direction, curating, publishing and distribution of artists’ works in the field of photography, fashion and design.
In 2005, she opened the Sit Down Gallery, a multidisciplinary exhibition space next to the Picasso Museum in Paris.
Since 2013, the gallery’s programming is essentially devoted to contemporary photography from the French and international scene, with a particular focus on documentary photography. The Sit Down gallery is also interested in artists seeking to transcend photography by making it dialogue with other mediums or by questioning the limits of its mimetic use.
SIT DOWN participates in international fairs such as PARIS PHOTO, PHOTO LONDON, PHOTO LA in Los Angeles, The Photography Show presented by AIPAD in New York, UNSEEN in Amsterdam…
At the same time, Françoise Bornstein is nominator for the Niépce prize and an expert in portfolio readings at the Rencontres d’Arles.