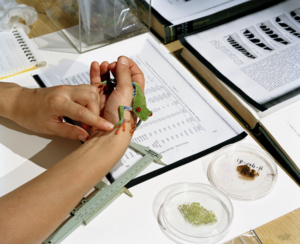 Sanna Kannisto photographs animals by taking them out of their natural environment. The animals are captured by professionals for a brief portrait session and then fed and watered before being released into the wild. The majority of the images are captured in a portable set-up that she takes with her. The device functions as a miniature studio and, as in traditional portraiture, provides a background, defines the field. Sometimes it even acts as a laboratory bench.

The lens captures tropical plants, bats, armadillos, snakes, frogs, cut off from their natural habitat. The photographer presents them with no other distraction than the beauty of their anatomies. Each image is accompanied, as in any scientific publication, by the Latin name of the species depicted.

Sanna Kannisto, born in 1974 in Finland, lives and works in Helsinki.Her work, which lies at the crossroads between photography and scientific observation, reveals her subjects in a new and unexpected light. She has focused on the observation of nature and its particular manifestations as expressed in the landscapes, flora and fauna of
the rainforest.