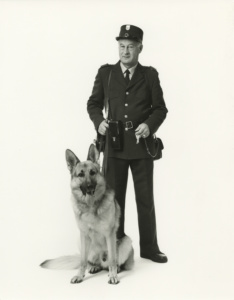 Rolf Wessendorf became a professional photographer 65 years ago and shaped the media in Eastern Switzerland with his unmistakable visual language. It has been said that he was able to photograph everything and everyone. He photographed his clientele, politicians and celebrities, but also old oaks and cemeteries, mushrooms and cats,
‘his’ Schaffhausen, the poet Alfred Huggenberger and Adolf Dietrich’s studio in Berlingen, nudes or striptease dancers, Venice and Italy, the land of desire. The selection People in their leisure time or at work focuses on the relationship between people and a pet.

Rolf Wessendorf was born in Kreuzlingen in 1931 and completed his apprenticeship as a photographer in 1950. He then worked for various photographers throughout Switzerland. From 1956 onwards, he worked for the Carl Koch photo shop in Schaffhausen. In 1958, Carl Koch withdrew from the photographic part of his business and Rolf Wessendorf took over. From 1957 to 1981, he was a member of the examination committee of the Swiss Association of Photographers for master craftsmen.