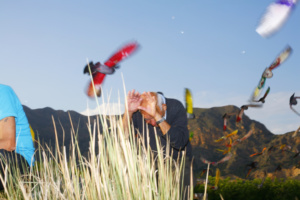 In a Spanish variant of pigeon racing, a hen pigeon is released while dozens of cock pigeons fly after her to compete for her favour. Although none of them really fully achieves this goal, the male who spends the most time near the female is the winner, the most valiant pigeon, the one with the most reproductive instinct, the most macho. Painted with primary colour combinations, the pigeon selected, bred and trained to mate becomes a projection, a flying vector of the pigeon fancier and represents his sporting, economic and sexual success or failure. Beyond the social and the documentary, Ricardo Cases searches for the pulsations beating under the banal, often unglamorous surface of contemporary Spain.

Born in Spain in 1971, Ricardo Cases joined the Blank Paper collective in 2006. Since 2013, he has been a member of the AMPARO platform. Since 2007, he has been teaching in different schools. His photographic work deals with the human in its anthropological dimension. He has published half a dozen books including Paloma al aire (Photovision – Schaden – Dewi Lewis, 2011).