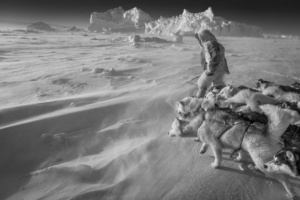 For more than 40 years, Ragnar Axelsson has been photographing people, animals and landscapes in the remote regions of the Arctic, particularly in Iceland and the far reaches of Greenland, revealing his most fascinating explorations. His stark black and white images capture the elemental human experience of nature at the edge of the habitable world. They make visible the extraordinary relationship between the inhabitants of the Arctic and their extreme environment, now undermined by the effects of global warming. Beyond the strength and beauty of the images, his work invites an essential meditation on the political, human and environmental issues of our time.

Born in 1958 in Iceland, Ragnar Axelsson has been working as a photojournalist for an Icelandic newspaper since 1976, as well as freelancing for numerous magazines. His images have been widely exhibited. He has published seven books, including Arctic Heroes (Kehrer Verlag, 2021), and received numerous awards.