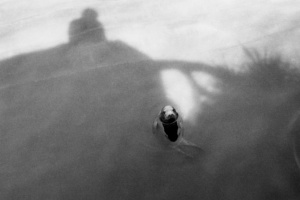 As a young father, he began photographing in the zoos he visited with his children. From the very beginning, in the rectangle of his Leica, he constructed pure, elegant photographs, marked by a constant humour that allowed him to adopt a fair and amused distance to what was unfolding before his eyes. With a very sure sense of space and distance from the subject, tightly composed images, he knows how to transform moments of reality into often mysterious photographs without ever lapsing into the anecdotal. If he often provokes a smile, behind this initial reaction, he quickly raises a series of questions about the nature of what he is showing us (his use of reflections is truly disturbing) and about the meaning – or lack of meaning – of the attitudes or situations he points out.

Born in 1947 in Belgium, Michel Vanden Eeckhoudt died in 2015. Coming from a tradition of reporting that led him to collaborate with the press, he began his personal work with sets devoted to various competitions in Belgium and to immigrants in his country. A book was published by Delpire in 1982 under the title Zoologies.
The images were made available by Agence VU’.