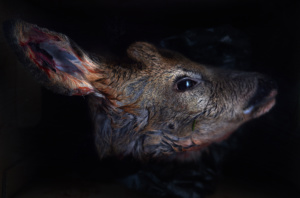 During several trips to central France, Magali Lambert created her series by following hunters and farmers. When they decide to kill an animal either as game in a hunt or as pests on farms, she takes a portrait of it. This relationship to predation interests her because she works on life, death and abandonment. The passage from life to death of the animal is done little by little, the life still resides in the eye. They are dead but appear alive, simply asleep.

Born in 1982 in France, Magali Lambert, who graduated from the École nationale supérieure des Arts Décoratifs de Paris in 2006, develops her work from the scenography of relics. Attempting to retain what tends to disappear, she gathers and ritualises collections of abandoned materials that she rescues from the dumpster or from oblivion. She is a member of the Agence VU’.