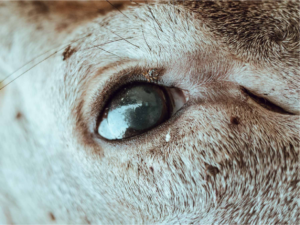 Being a hunter is a complicated business. The first hunt may seem like a harmonious act that has a deeper meaning: contact with nature, a sense of strength, community… All these factors contribute to the attractiveness of this action. But these are only appearances. Pulling the trigger is not the most difficult act, anyone can do it. The most difficult thing is what happens afterwards, the consequences of the shot: the damage caused.
Hunting techniques are constantly evolving but expanding bullets are still used. This type of ammunition expands from the front of the bullet as it pierces the tissue, taking on a mushroom-like shape. Looking at the deformed bullets, one can imagine the damage caused. For this reason, their military use is generally prohibited. Photographs of such bullets became the focus of this story and the source of the project title. Terminal Ballistics (also called wound ballistics) is a study of the behaviour and effects of a bullet as it strikes and transfers its energy to the target.

A self-taught documentary photographer, born in 1982 in Poland, he focuses on complex subjects related to social isolation and identity. An artist book was published by Światło/siła Foundation, in 2019, under the title Terminal Ballistics.