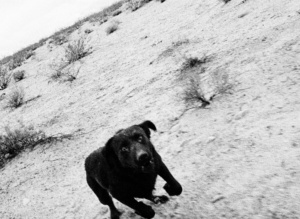 From 1995 to 1998, John Divola was working on a series of photographs of isolated houses in a desert in Southern California. In the desert, a dog can perceive a car several miles away. So, as he mean- dered through the desert, a dog would sometimes chase his car. He equipped himself with a motorised 35 mm camera loaded with fast, grainy black and white film. ‘When I saw a dog approaching the car, I would pre-focus the camera and adjust the exposure. With one hand on the wheel, I would hold the camera out the window and expose anywhere from a few frames to a full roll of film’. Thus was born this series.

Born in 1949 in Los Angeles, John Divola is a graduate of the University of California, Los Angeles. Since 1975 he has taught photography and art
at numerous institutions. His work has been shown in over seventy solo exhibitions in the United States, Japan, Europe, Mexico and Australia. He has published more than a dozen books including Dogs Chasing My Car in the Desert (Nazraeli Press, 2004).