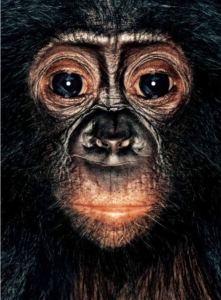 Watching a programme on primates, James Mollison was struck by the similarity of their faces to ours. The great apes occupy a grey area between man and animal. For the series James & Other Apes, he decided to photograph gorillas, chimpanzees, bonobos and orangutans using the aesthetics of passport photography – its pervasive style inferring the idea of identity. He travelled for four years to Cameroon, the Republic of Congo, the Democratic Republic of Congo, Indonesia, Germany and
the United States to meet orphans of the bushmeat and live animal trade. Likendze, Djeke, Wazak, Talila, Simon, Ya-ukk, Likasi, Kitwiti and the others are photographed as individuals representing species whose survival is threatened. These staring faces raise profound moral and scientific questions – including what it means to be ‘human’.

James Mollison, born in Kenya in 1973, lives in Italy. After studying art and design, then film and photowww.jamesmollison.comgraphy in England, he worked in Italy at Benetton’s creative laboratory, Fabrica. He has produced half a dozen books, including James & Other Apes, with an essay by the ethologist and anthropologist Jane Goodall (Chris Boot, 2005).