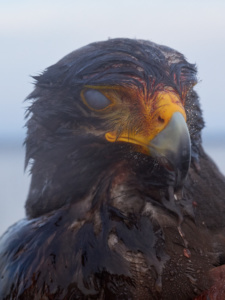 ‘This body of work is a response: a timeless dia- logue with the work of my mother, Jeanne d’Arc Fournier, as well as a tribute-attack to the famous Ravens series by Japanese photographer Masahisa Fukase’ (Guillaume Simoneau).

The genesis of the Murder series dates back to the spring of 1982, around the time Fukase was producing his masterpiece. Simoneau’s family adopted a nest of orphaned baby crows. The photo- graphs from that time, taken by his mother, paint an unusual and lyrical vision of childhood. Nearly forty years later, he commemorates these moments in dialogue with his images produced in the spring of 2016 and 2017 in Kanazawa, Japan, home of Fukase’s Ravens. The pervasive oppositions and tensions between his own images and the softness of his mother’s instinctive images reveal a romantic vision of his childhood and the past. The layers are multiple: sublime / horrible, sweetness / violence… The fragmented form reflects the extraordinary complexity of the world we live in. Through these images, he tries to dispel the hazy mystery of his own identity and it took him years to find the right distance to make them public.

Born in 1978 in Canada, Guillaume Simoneau works between personal projects exhibited in various galleries around the world and editorial and com- mercial assignments. A book has been published by MACK, in 2019, under the title Murder.