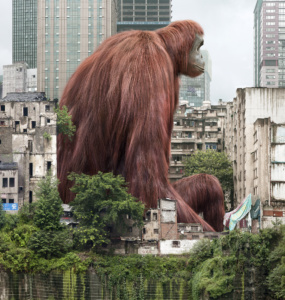 Influenced by science fiction authors, Liu Di shapes a new universe with a strong philosophical subtext. Each of his series opens up a personal aesthetic through the richness of his large-scale panoramas. His works generally use cinematic images featuring impressive combinations of animals, giants, lush vegetation and chaotic urbanization. Through this hypnotic imagery, Liu Di draws the viewer into a discourse on human existence and its future via his subconscious. He instrumentalizes a symbolism that oscillates between figures of power and existentialist humanism. His images raise questions about human and animal rights, urbanization, ecology and the hegemony of technology. Liu Di’s works inspire a strange sense of hope and melancholy.

Born in China in 1985, with a master’s degree from the Central Academy of Fine Arts of China (2013), Liu Di uses digitally manipulated photographs to highlight the relationship between nature and society.