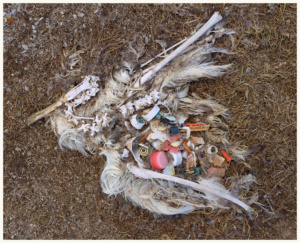 Chris Jordan’s series presents tightly framed photos of dead baby birds. Their open bellies show all the waste that they have swallowed and that has killed them, not a piece of plastic has been added for the photo. Here, the raw reality is enough.
In September 2009, during a first trip to Midway Atoll, one of the most remote islands in the Pacific, he photographed and filmed thousands of young albatrosses lying dead on the ground, their bellies filled with plastic.

The rubbish, from the coast and from fishing boats, forms a vast toxic shoal that rotates indefinitely in the ocean. Thousands of plastic objects float between two waters and cause the death of more than a million seabirds every year. We are also at risk because we eat fish poisoned by debris containing harmful chemicals.

Chris Jordan, born in 1963 in San Francisco, is a Seattle-based artist, photographer and film producer. He has created numerous works based on photographs of rubbish. His work leaves us to draw conclusions about the inevitable consequences of our habits.