The Furtastic Adventures of The Cabbit and The Folf (2010 – ongoing) 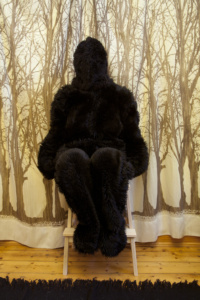 For this series, Charlotte Lybeer photographed Belgian, Dutch, French and German members of the ‘furry fandom’, a movement that made itself known in the late 1980s, at the dawn of the Internet, through Usenet forums. Adults transform themselves into anthropomorphic animals wearing plush costumes. The title of the series evokes fairy tales and refers to their own invented language. When something in the furry world is fantastic, they call it furtastic, a cabbit is a combination of a cat and a rabbit, etc. She photographs the subjects in their own living rooms. The characters appear as
actors on a stage, in the setting of everyday reality. Although her photographs have a documentary character and involve a simple visual language, the author nevertheless attaches great importance to her aesthetic choices, particularly through framing.

Born in 1981, Charlotte Lybeer is a Belgian photo- grapher whose work has been exhibited and published worldwide. She holds a PhD in visual arts and teaches photography at the Academy of Fine Arts in Antwerp. The Furtastic Adventures of the Cabbit and the Folf was published by Eric Ubben in 2012.