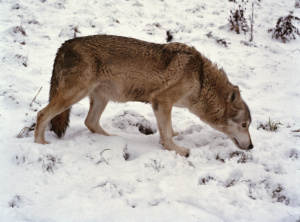 The idea that the state of humanity can be read and studied through our relationship with animals is a common thread in Charlotte Dumas’ work. She is particularly interested in the complexity of the values that underlie our relationship with animals.
In 2005, she travelled to Norway and Sweden, New York and Colorado to make the portraits in her Reverie series. Despite the photographer’s proximity to the wolves, which she frames from a distance that allows for non-invasive intimacy, the images reveal what separates the world of humans from that of wolves and depict the wolf as an enigmatic and imperceptible being. Her work is in harmony with the composition, light and poses of classical portraiture.

Born on 9 June 1977 in the Netherlands, Charlotte Dumas creates series on police and military horses, wolves in the wild, tigers in captivity and stray dogs. Since 2012, she has been using moving images alongside her photography practice. An expanded edition of the book Reverie has been published (Autoédition 2016).