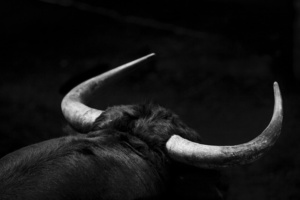 ‘Not all of us accept the fact that our bodies will one day perish. We assume it and a series of diversions help us to deny the most obvious truth: death is the guaranteed outcome.’ (Carlos Cazalis)

Whether or not the bull in the ring knows this is a pointless debate. In countless bullfights the bull has accepted, with courage and fear, the consequence of being introduced into the ring against its will. Would we as humans accept the same fate? The photo- grapher asks everyone what their true understanding and perception of ‘bullfighting’ is? Is it based on experience, on facts, on emotions, or is there a deep and unspoken remorse to live without fear when the end is inevitable?

This series is a critical look at these experiences of living and denying death, through the fleeting moments of matador José Tomás. In the intertwining of man and bull, these photographs underline the equal roles of ‘animal’ and ‘man’. They reaffirm that to die is to know how to live and that we can, in our daily lives, choose our roles or simply observe life and our own projection of an essential fear.

Born in 1969 in Mexico City, Carlos Cazalis grew up in five countries. His relationship with bullfighting is rooted in his family, he is the grand-nephew of matador Alfonso Ramírez (El Calesero). Returning to Mexico after completing a Master’s degree in art in New York, he began a career as a photojournalist in the early 1990s, as well as long-term documentary work. Sangre de Reyes (Editorial RM, 2016) is his second book.